The narrative is changing

Within the space of a week or so, it looks like the international covid narrative is suddenly shifting in a big way. There are U-turn announcements being made by several governments and international bodies who have been at the head of the charge in terms of mandates, lockdowns, and vaccine passport schemes.

At the end of last year, when the UK government implemented their vaccine passport for nightclubs, large sports events and big concerts, at the same time as they ramped up a massive "get boosted" campaign, I made a prediction.

I predicted that by mid-January the UK would have increased the scope of the vaccine pass, adding in bars, restaurants and cafes, to match the pass France has had in force since July 2021.

It appears I was wrong. The UK government is considering scrapping the vaccine pass, and relaxing many of their current restrictions.

Although let's not get too far ahead of ourselves, as Boris Johnson is facing a leadership crisis over parties held during lockdown restrictions. It is quite possible, I believe, that if Boris is ousted, we may get someone else who will be more draconian.

The narrative is changing throughout the mainstream media. Instead of the endless push for vaccination and booster shots, the headlines are starting to fill with the "we must learn to live with covid" message.

However, it's not just the UK. Here is a short clip from The Highwire episode 250, aired Thursday 13th January 2021.

Elsewhere, others too are starting to admit truths that many have been pointing out for months now.

Current CDC head, Rochelle Walensky, stated on CNN on Jan 10th “Our vaccines are working exceptionally well … but what they can’t do anymore is prevent transmission.”

Many silenced and censored scientists have been trying to point this out from the earliest days of the vaccine rollout, when "breakout cases" quickly started to show that both infection and transmission were occurring in vaccinated populations.

There are many more examples of this sudden shift in the narrative, and this article provides a good overview of some of them, from a US perspective.

In the UK, here's how things currently look:

For a great overall view of this current shift in attitude, "The Jaxen Report" section of The Highwire episode 250 makes interesting viewing.

What is going on?

I believe this sudden shift is happening because the people pulling the strings can see that their narrative is unravelling, as more and more people are starting to wake up to the idea that they have been deceived.

The vaccines that were promised to end the pandemic have failed to do so. They have failed spectacularly. Two doses were needed to "protect the community". That soon became three doses, and in Israel a fourth doses is now being offered... although even there the story is changing.

Current vaccines, we are told, have very limited efficacy against the Omicron variant.

Mainstream scientists and medical agencies are now starting to speak up, pointing out that we can't keep "boosting" every three or four months.

Vaccine safety is also beginning to come under more scrutiny, as it becomes ever more obvious that databases worldwide are recording unprecedented levels of deaths, heart problems, blood issues, nervous disorders and more.

See previous posts here and here for more on vaccine safety, and links to these databases.

It would appear that the uptake of "booster" jabs has been less enthusiastic than hoped. In the UK recently they were pleading for people to come forward for a shot, as they had millions of doses about to reach their expiry date.

I think this may be one of the bigger influences behind the sudden narrative change.

There are many legal groups around the world planning on mounting legal cases against those who have implemented what are widely believed to be crimes against humanity.

A group in the UK have submitted a filing to the ICC (International Criminal Court), which gives a good idea of the type of accusations being made worldwide.

The filing states, "we charge those responsible for numerous violations of the Nuremberg Code, crimes against humanity, war crimes and crimes of aggression in the United Kingdom, but not limited to individuals in these countries."

And here's the full pdf detailing the filing:

The panicky response to a crumbling narrative

With things starting to unravel, I think the Omicron variant has perhaps handed a "get out of jail free" card to those listed above, who see themselves coming under more and more pressure. 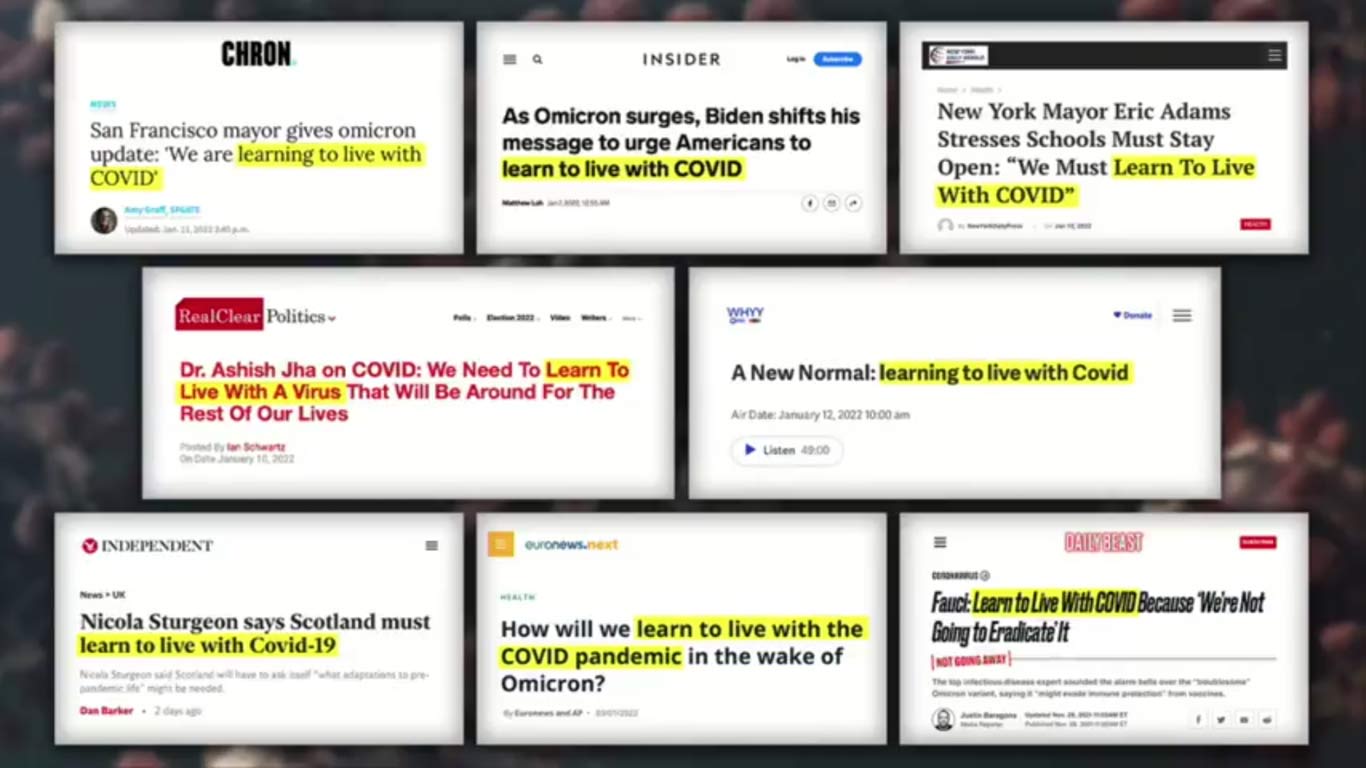 At best they are looking incredibly incompetent. A worst case scenario is that those responsible for things are going to be branded murderous criminals, and prosecuted as such.

I believe their sudden turnaround is an attempt to walk away from the problems beginning to surround them.

Their hope is that they can say that the virus became less deadly, therefore we can now relax restrictions, and perhaps even slow (or halt?) the vaccine rollout. I don't think this was the original intention, but they are being forced into doing this.

The claim will be that vaccines helped save lives during the more deadly phase of the pandemic. The hope, I guess, is that this change of course will appease disgruntled populations around the world.

I imagine that when Pfizer produces a modified version of their vaccine targeting Omicron (promised for March), enthusiasm for it will be limited. I suspect it will be offered on a personal choice basis to those who are still onboard with the vaccine narrative.

Is everyone on board with the new plan?

Many countries still don't seem to have received the memo about new plans to walk back the restrictions, and the need to "get used to living with covid".

Here in France the "passe sanitaire" has become a true "vaccine pass", as a negative covid test is no longer accepted as a reason to be allowed access to freedoms we all used to enjoy. Only vaccinated (and infected/recovered) are granted such privileges now.

Australia still seems to be aiming for the #1 spot on the tyranny leaderboard. Apparently fit athletes at the peak of their career, if unvaccinated, represent an unacceptable health threat to the country.

Canada are still pushing vaccines hard, and are threatening to increase taxes on the unvaccinated.

And around the world those who choose to remain unvaccinated continue to be marginalized, sidelined, discriminated against, feared and "othered". As I've pointed out before, such societal division never ends well.

I am slightly hopeful in terms of what is happening in the UK and the US right now, but remain very sceptical. I think all of this is far from over.

I still believe, despite the current UK suggestion ditching of vaccine passes, that a big part of this whole agenda is to get everyone to accept digital apps that can be used to catalogue and control us.

And before long, it will become clear that the agenda continues to be pushed, even when there is a pretence that it isn't.

Things might look promising for a short while, until perhaps, at some point in the not-too-distant future, a new deadly pandemic is announced, or the climate crisis agenda is brought into sharper focus, or cyber attacks bring supply chains screeching to a halt.

At that point we'll see the fear propaganda begin to ramp up again, and hear the cries for something to be done "to protect the community".