The last time I went on a “demo march” was almost 40 years ago, in the early 1980s, when I was 19 or 20 years old, studying Outdoor Education at Liverpool Polytechnic.

I didn’t really care whether Maggie (Thatcher) was in or out. My main passions at the time were climbing and canoeing, and I had gone on the march because a few of my more radical friends were going.

I’ve spent most of my life following my own passions, which has taken me all around the world, without a real home base for long periods of time, so in the 40 years since then I’ve had little interest for politics and other causes.

But I truly feel we are fast approaching some sort of global inflection point, and if we just let the ever increasing restrictions upon our freedoms to continue to roll out over us, we’re never going to go back to any sort of “normal”.

I think a very dark future lies ahead if we don’t stand up to the obvious over-reach of government around the world.

So after some discussion, we decided that we’d head to our nearest big city here in France on 24th July, to hopefully find some like-minded people on what was obviously going to be a big day worldwide.

A bit of online research told us where and when people would be gathering, and we found a group of perhaps 1,000 people at Place de la Republique at 2pm in the French City of Dijon. It was pouring with rain, and many people carried umbrellas. There were a few speeches, lots of cheering, a bit of chanting, all in a very positive and upbeat atmosphere. 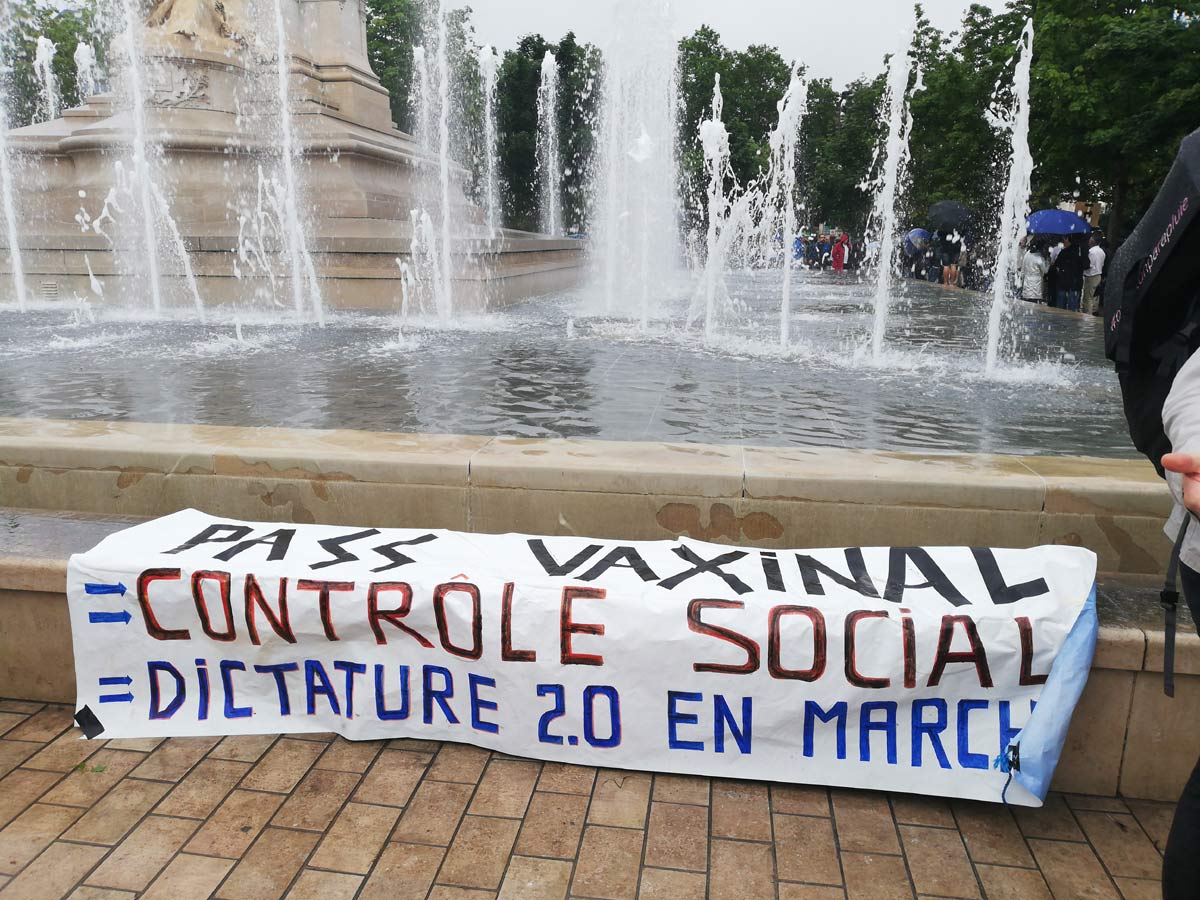 After half an hour or so the crowd started to head out of the large square, crossed the main road, and headed towards the city centre. Spirits were high, the crowd friendly and cheerful, and even the rain had stopped.

We’d only got 50 metres down the first street, when there were a couple of loud cracks above us, followed by sharp firecracker explosions. Small cannisters spewing thick smoke rained down around us, and within seconds people were gasping and coughing, our part of the crowd retreating back in the direction from which we’d come.

The fumes caught in our lungs, and our eyes watered, but we were lucky to be just on the edge of the billowing cloud of noxious gas. There was a slightly panicky push as several hundred people tried to escape the fumes, which the wind pushed in our direction.

We looked down the street in amazement at a scene we’ve only ever witnessed on the evening news. As we watch the last of the stragglers emerge spluttering from the smoke, more canisters were launched from the rooftops, and a wall of fumes pushed us back again.

Back at the ringroad at the edge of the Place de la Republique we waited with crowds of others. We looked around to see many other regular people, just like us. This wasn’t a crowd of young rebels... these were just normal people here to express their upset about the restrictions being placed upon their freedom.

Vanessa and I were amazed. We’d just been tear gassed by the police... at a completely peaceful demonstration. It was a shocking display of power... a warning to the crowd to behave.

As the clouds of smoke cleared people began to hesitantly head back down the street. We nervously joined them, ready to turn back at a moments notice, taking note of side streets and alleys that might offer sanctuary if more canisters were fired into the crowd.

Fortunately, for the rest of the march the crowd were unmolested, and the friendly atmosphere of camaraderie returned. By the time we reached on of the squares in the centre of the city the crowd had swelled, and my best-guess estimate would be around 3,000 people. There was a significant police presence, and many people tried to engage the policemen in conversation to no avail. 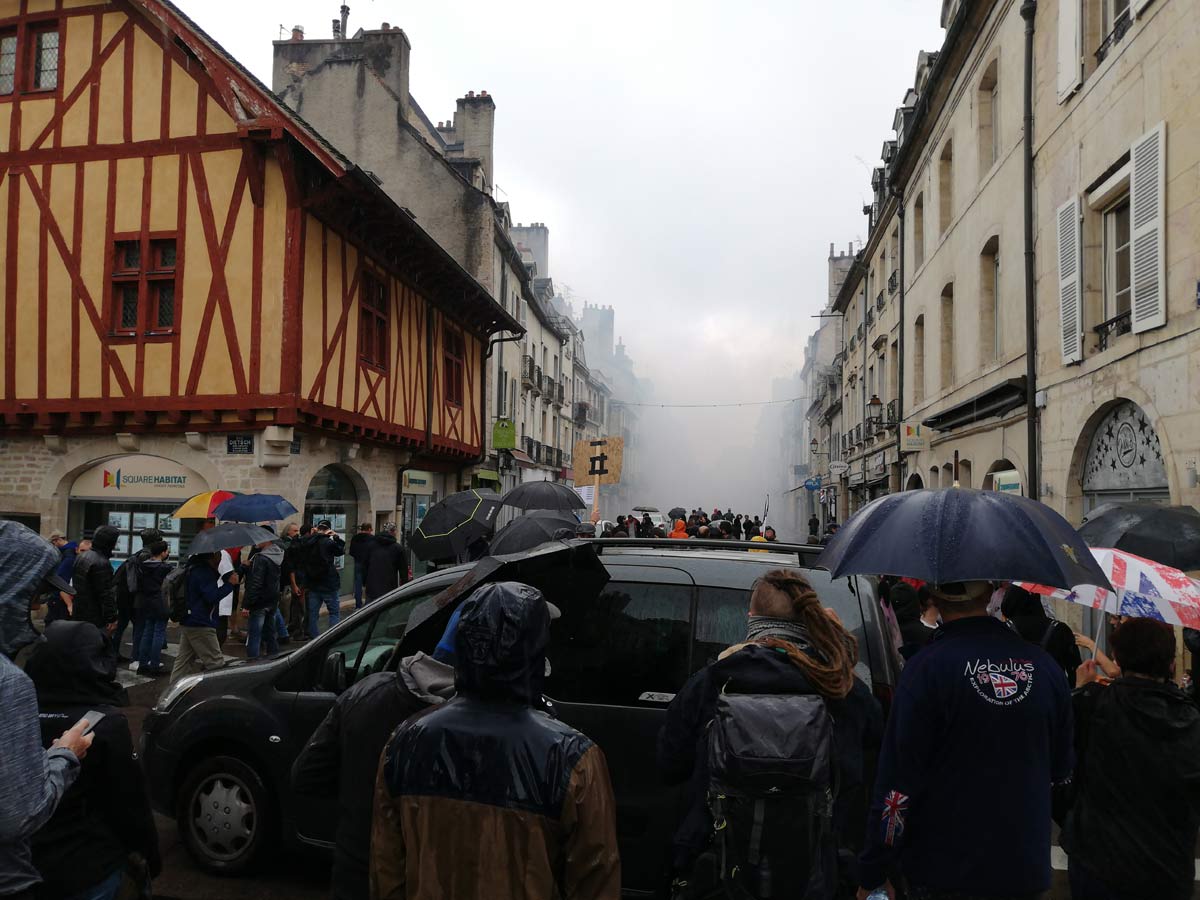 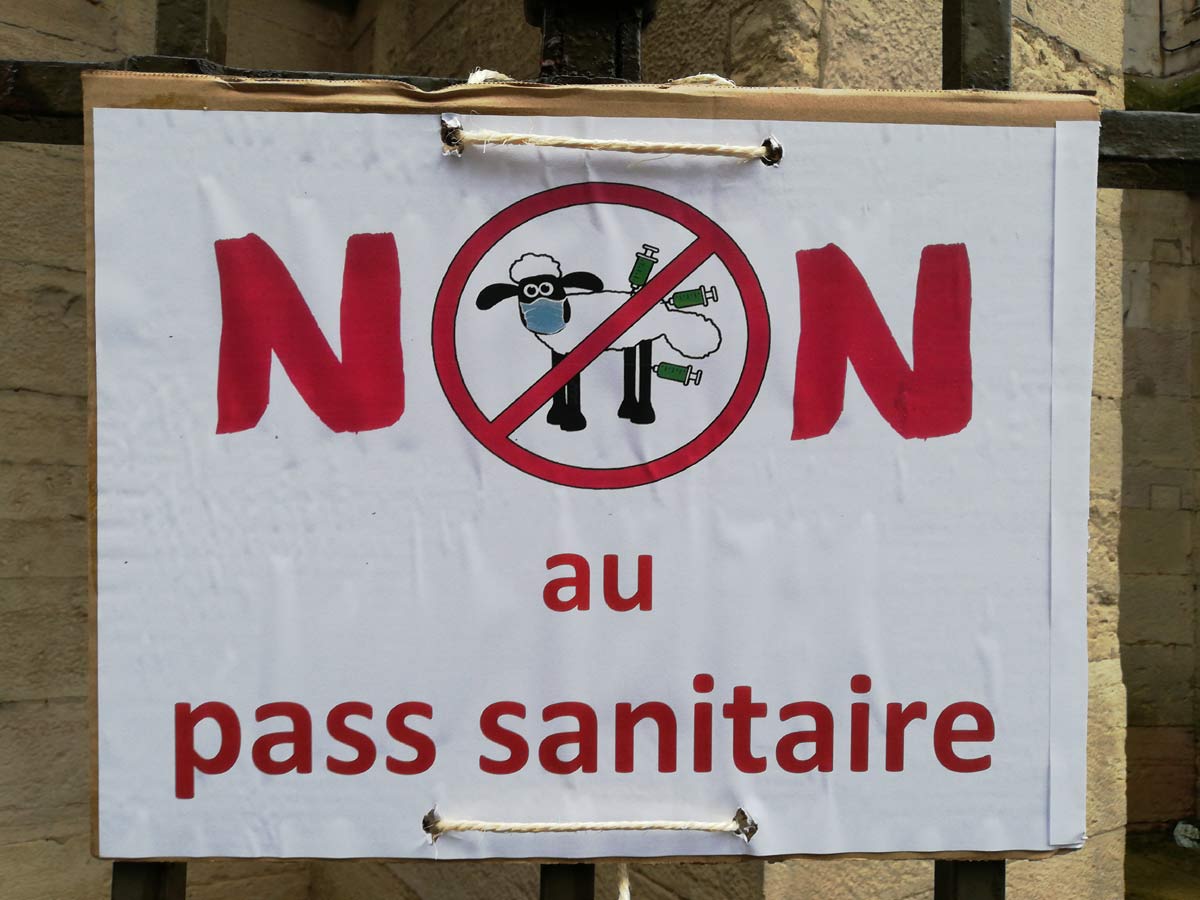 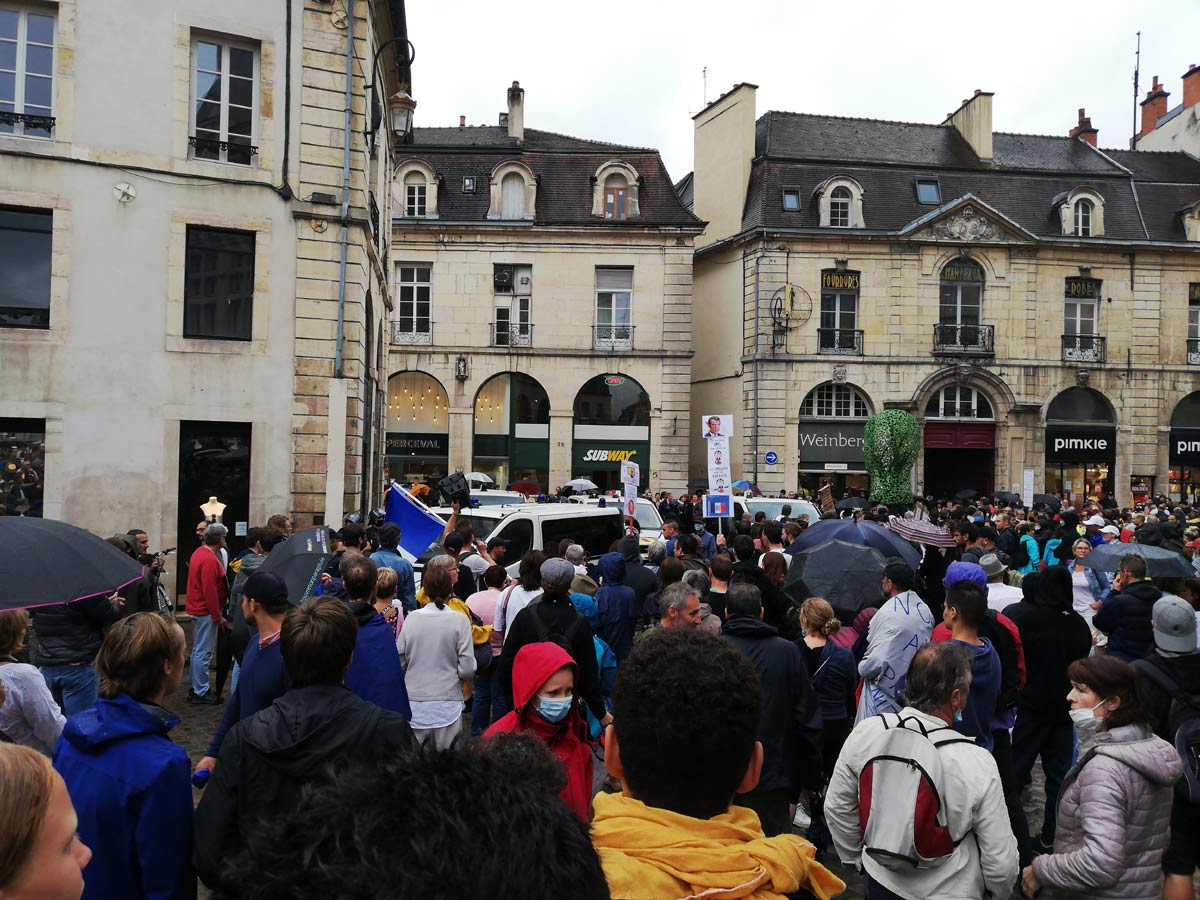 We stayed for a couple of hours, and saw no trouble at all. People were well behaved and in good spirits.

Later in the evening, back at home, we felt a sense of pride at having made the effort to go along to stand up for what we believe, as well as a great satisfaction that we, and thousands of others, had pressed on, despite the obvious attempt to disrupt or even stop the march going ahead.

To us the tear gas event was a very clear indication that there is a strong vested interest in trying to stamp out any demonstration of dissent about the health pass roll out and restrictions on our personal liberty. 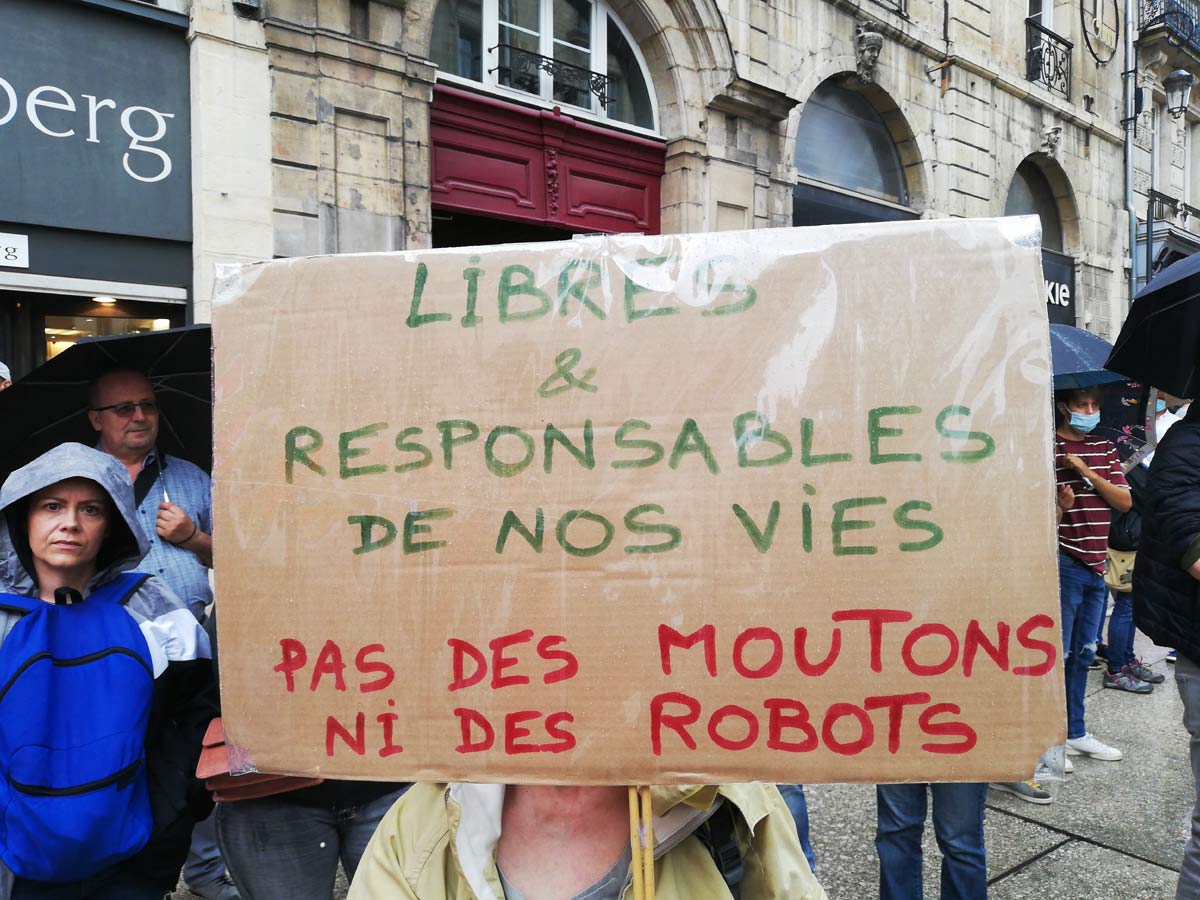 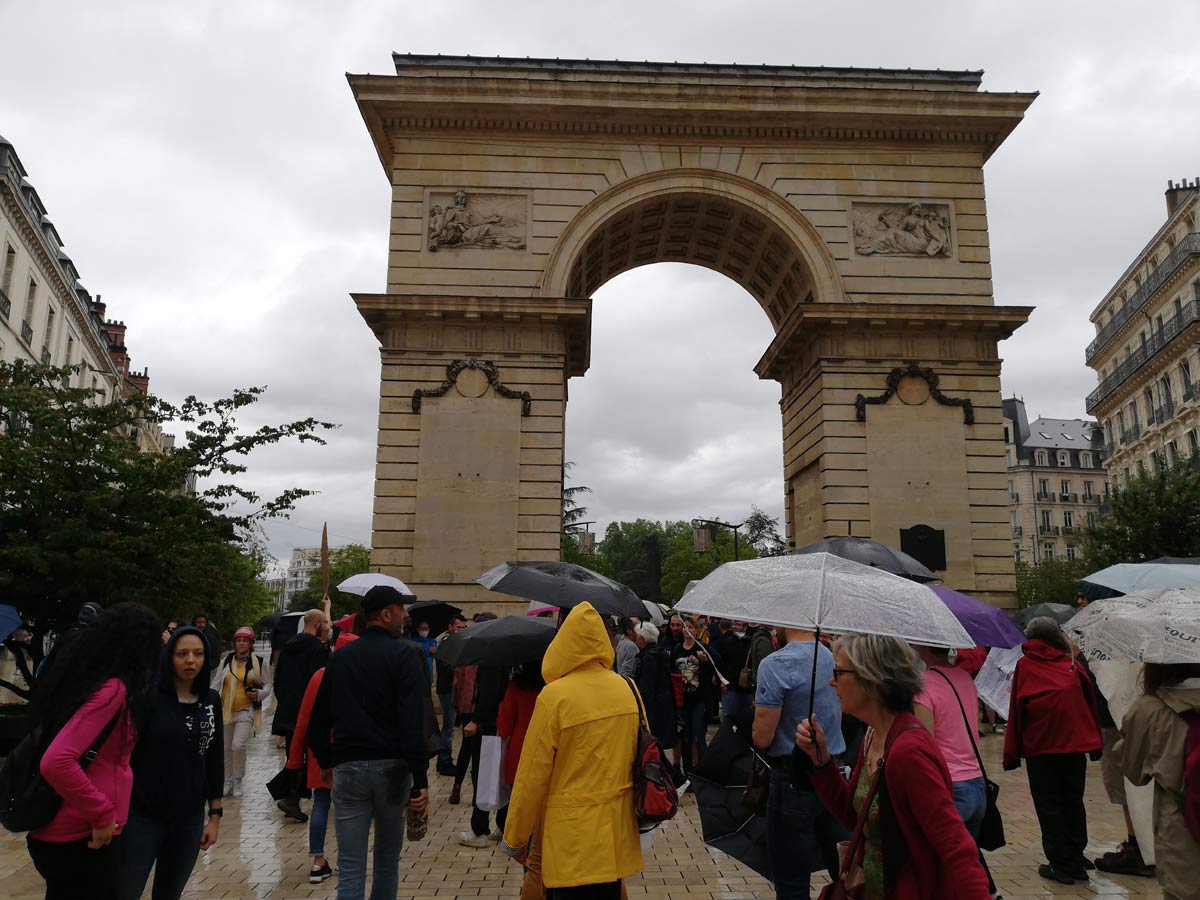 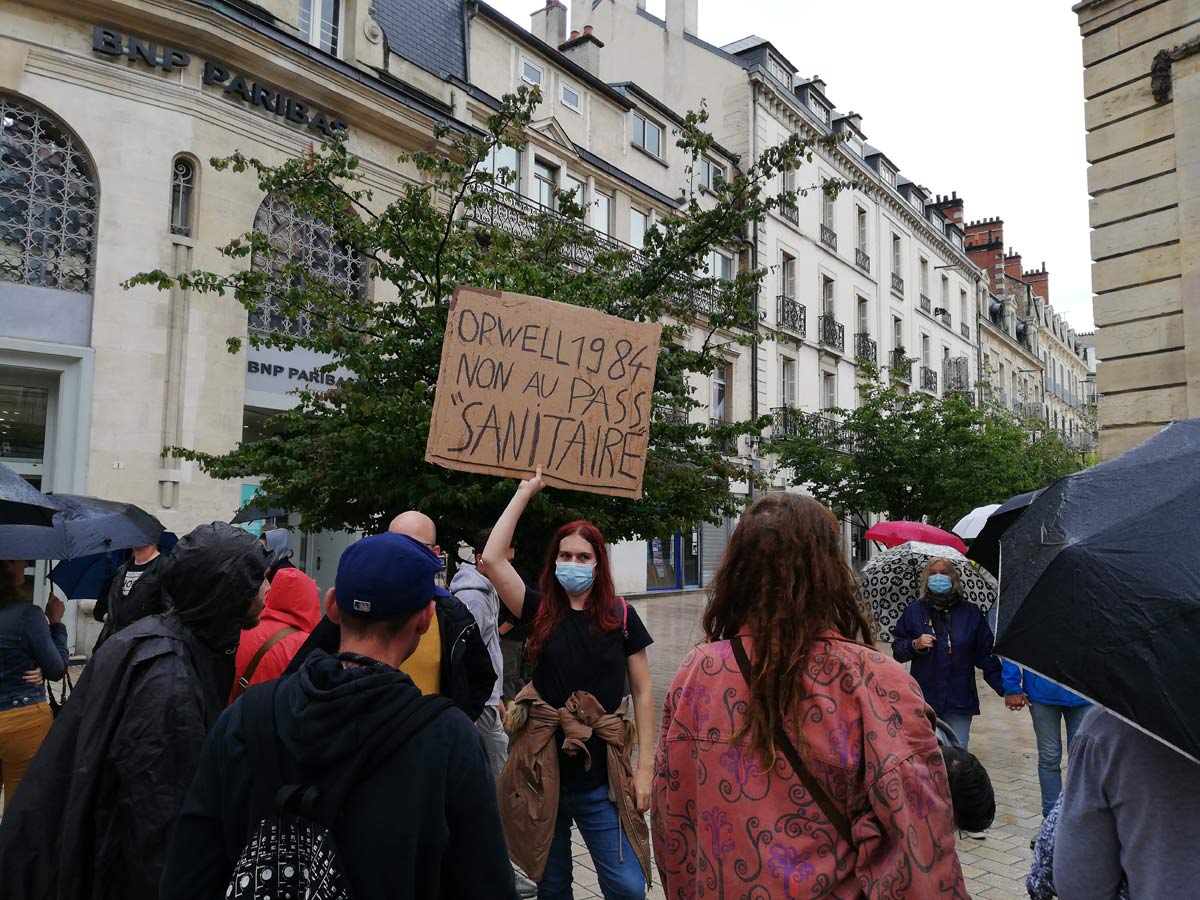 In summing up the day, it occurred to me that what all of us at the march wanted is very simple... we just want to be left alone, free from governmental interference, to make our own choices about our health, and how we choose to live our lives.

But it is very clear now that others are unwilling to allow us even this basic freedom.

Here's a short montage of video clips from our day...