We attended our second “manifestation” in Dijon on Saturday (14th August 2021), and once again felt tremendously lifted to be around so many people who share the same concerns we do about vaccination, and perhaps even more importantly, about the implementation of the French “passe sanitaire”.

(Some video of the event in my next post)

See my previous post here for more info on the medical apartheid system now being enforced here in France.

As I’ve previously stated, I’m done with discussing vaccines for now. I believe we’re facing an equally important challenge, which represents a threat to all, whether vaccinated or not.

We didn’t really know what to expect the first time we went to Dijon a couple of weeks ago, but this time we had an idea of how the day might unfold. I wanted to express my opinion, and decided that in order to do this I would need to make a sign in French.

I believe that part of the methodology being employed to force these restrictions upon us is the age-old tactic of divide and conquer. The French government want to pitch the vaccinated against the unvaccinated, but France seems to be rising to the challenge, seeing that we need to be united as a people against those who would take our freedoms away.

That is what I wanted to express on my sign: 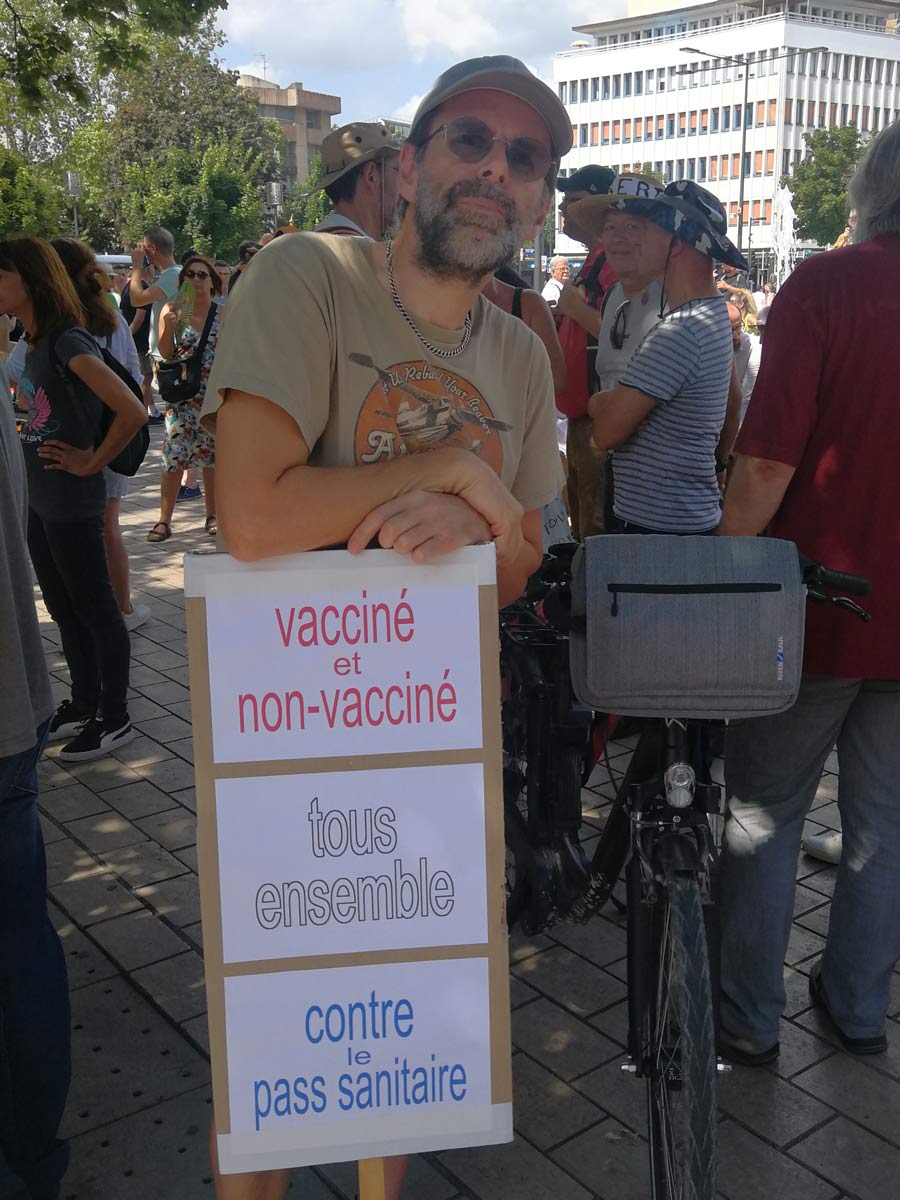 Against the health pass

On our previous “manif” we hardly spoke to anyone, but with a sign in hand we were approached many times by people wanting to chat, comment, and support.

There were many other signs expressing the same sentiment, that choice about vaccination was unimportant, but solidarity against our loss of freedom was of paramount importance.

The loss of freedoms ushered in by the passe sanitaire are immediately obvious to the unvaccinated, as the impact on all aspects of our lives is now a part of our day-to-day lives, but I think the potential for more restrictions upon us all aren’t quite so clear to those afforded freedom at the moment by flashing their lovely green digital pass.

"What do you have against the idea of a digital pass?

My "all together against the pass" sign was more of a suggestion than a statement of fact, which was made very clear to me when a man, obviously not part of the demonstration crowd, asked me:

“So what exactly do you have against the idea of a health pass?”

He was vaccinated, had his passe sanitaire on his phone, and pointed out all of the freedoms that were available to him. "I can go to a restaurant, fly back to Dubai, grab a coffee. I haven’t lost any of my freedoms.”

It was difficult to hold a conversation with him, as few of the marchers around me jumped into the discussion, and heated voices competed to answer his points.

In a quieter moment I tried to voice my concerns about where the pass may take us all in the future. He wasn’t at all concerned about having to have booster shots, and wanted to know what other restrictions I imagined might follow.

It was a good question, and I felt frustrated that I couldn’t express my worries in a succinct, articulate manner. We chatted for a minute or so, and then parted with a cheery, “Have a good manifestation” from him.

So, I decided, I need to try to answer for myself a clearly as possible why I see this as such an important issue.

It is obvious that the passe sanitaire is currently being used here in France to coerce or, in many cases, force people into accepting an experimental treatment, the long-term effects of which are completely unknown at this time.

Macron himself stated this very clearly in his 12th July address to the country.

I find this very alarming, as the same agenda seems to be rolling out in so many countries across the world, although with varying methodologies.

In Australia and New Zealand, for example, they are pursuing a “zero covid” strategy, with very harsh lockdowns, and huge vaccine propaganda. In the States there is so much division, pushed by the “pandemic of the unvaccinated” narrative, that unvaccinated are under very heavy peer group pressure.

It is quite obvious there is a worldwide goal to vaccinate all, and it feels like several studies are running concurrently to assess which method of coercion is most effective in getting the most people to comply.

So that’s my #1 concern... the hidden agenda which appears to be behind the massive medical experiment, which the passe is obviously pushing here in France.

However, there are much bigger issues to look at too, whether you are vaccinated or not. Because I believe we’re seeing the thin end of the wedge here. As I’ve pointed out before, once those in authority gain a greater degree of control over the population, they rarely, if ever, let go of that power.

Let’s see what happens here in France when the passe sanitaire system comes up for review on November 15th. I very much doubt they will decide the passe is no longer required. I hope I am proved wrong

At the moment the passe only targets those who have refused to be vaccinated. But with lots of talk of booster shots, which are already being administered in Israel, then you can be sure the vaccinated will find their passe out of date at some point, until they re-submit to vaccination requirements.

I imagine the passe will transition from it’s “green” status to amber a couple of weeks before your booster is due, giving you time to “protect yourself and others”. Once your passe turns red you’ll be locked out of society in the same way the unvaccinated currently are.

It isn’t difficult to imagine a booster being required every 6 months to maintain your green pass status.

Comply, or be locked out of society.

Once the passe is fully implemented across the whole of society we can imagine all sorts of other requirements could be placed upon us in order to receive our permission to be free.

They can literally add any requirement they like to keep you in line.

But just remember that two years anyone suggesting that the world would be under "lockdown" within the next six months would have been denounced as a lunatic.

And less that one year ago, people suggesting we'd be required to produce a "papers please" pass to move about freely were mocked and scorned as tin-foil hatters.

Many "conspiracy theorists" have been pretty accurate with their predictions of where we're heading.

Beyond control centred around vaccination, the passes offer endless opportunities for those in power to exert more control over the population.

The fast-approaching Central Bank Digital Currencies (CBDCs) offer further potential for nightmarish Orwellian control. This is a topic for a separate post in its own right, as there is much to say about this matter, but in the meantime you might want to do a little research about the possible implications of such a drastic change in our financial system.

Needless to say, CBDCs would give central planners much more control over data around how we choose to live our lives, and what we do with out digital currency.

It doesn’t seem much of a stretch to imagine your digital wallet app being connected to your health pass app, and restrictions on what you can spend your money on being tied to your current health status.

Not vaccinated? No plane ticket purchases allowed. No long distance train tickets for you until you comply. No, sorry, you can't buy tickets for this concert.

I truly believe those who happily accept a vaccine passport now to secure their freedom to travel, to eat in a restaurant, to have a coffee on a terrace, are unwittingly accepting the first stage of a regime of digital entrapment which will eventually imprison us all.
Previous
Next